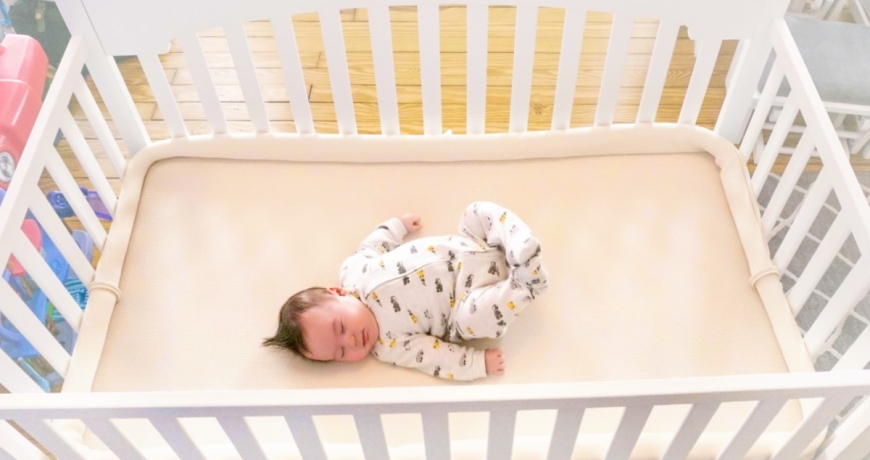 Now to be sure, we make NO medical claims on our breathable sleep system. But the fact remains, that due to our sleep systems design and industry leading level of breathability, there are inherent advantages that are beneficial for babies. Despite the claims that other breathable baby mattress manufacturers make regarding breathability, we are the only manufacturer who has ever submitted a mattress to be scientifically tested to the “Gold Standard” industry leading test for measuring CO2 dissipation. This testing wasn’t done so it could be used as a medical device, it was so parents would know that if their baby rolled over from their back to their front, there was very little chance of their baby suffocating or becoming asphyxiated. This CO2 dissipation test which was designed by Dr’s. William W. Fox and Thomas H. Shaffer, both leading experts in the field of SIDS research, scientifically proved that CO2 dissipated at a rate 10x faster on our breathable sleep system than a firm mattress with tight fitting sheet as recommended by the American Academy of Pediatrics (AAP). But over time faced with the facts of this testing, the AAP in their “Updated 2016 Safe Sleep Policy Statement” recognized the benefits of our breathable sleep system for those babies who prefer to sleep on their tummies.

There are numerous other benefits to the Breathe Easy Baby sleep system as well. Although there has been no scientific testing to confirm this, due to the cradling effect of our sleep surface and the elimination of pressure points associated with firm baby mattresses, babies who spend prolonged periods of time on their backs, in our opinion, are less likely to be diagnosed with plagiocephaly, i.e. flat head syndrome. There’s also anecdotal evidence that suggests that this cradling effect may also help to provide babies with a more comfortable sleeping position, thereby allowing them to sleep for longer periods of time at a stretch. Due to our high level of breathability we have also received numerous comments from parents whose babies are prone to night sweats, that this condition was drastically reduced or in some cases eliminated altogether. Another important benefit of our breathable sleep system is its ability for the sleep surface to be removed for laundering. Thereby reducing baby’s exposure to potentially harmful levels of bacteria. This is especially important since babies’ respiratory systems are still developing for up to six months.

So, I think it’s safe to say that not all baby mattresses are created equal. One in fact may not only be more comfortable, but may help to save your baby’s life, that mattress is the Breathe Easy Baby.

Recently an article appeared in the Parenting section of the New York Times entitled “What Causes SIDS”. I’ve…